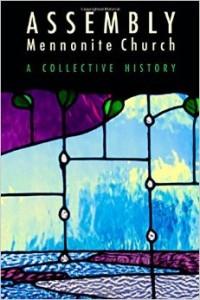 Written in 2014, “Assembly Mennonite Church: A Collective History” is the story of a congregation that began 40 years ago on the heels of the tumultuous 1960s. At its start, the young congregation was made up of house churches and small groups who decided to “assemble” for worship and discernment on Sundays. The book is a collection of essays by 12 authors, all of whom are or have been members of Assembly Mennonite Church, some since its founding. Writers offer different perspectives on the early vision of the first members and reflect on how that vision became reality. Some describe how that vision has evolved over the years. The writers not only tell the history of the congregation in these areas but also reflect on how the past influences — or is losing its influence — on the present. Order your copy by clicking on the book cover.

The first meeting of Assembly Mennonite took place January 6, 1974, in Goshen. To put that initial Assembly gathering in perspective, some background is appropriate.

In 1973 a small “Koinonia” group of about twenty persons in the Goshen College campus setting was meeting on a regular basis during the week and attending Mennonite churches, primarily College Mennonite and Waterford Mennonite, on Sundays. This group, which called itself Metanoia, felt called to explore new forms of congregational organization, program, and worship; and to serve as a setting where theoretical believers’ church thought could take on a more visible, concrete expression.

This was a time when a number of house fellowships in the Goshen area were exploring the meaning of being the church and were functioning more or less independently of other established congregations. Beginning early in 1974, folks from Metanoia took leadership in calling together some of these house fellowships in a larger corporate structure. As they met for regular worship, the Sunday morning gathering became an assembly of smaller groups. Thus the name “Assembly” was adopted.

Throughout 1974 the numbers of Assembly members and attenders grew rapidly (past 100), so that by the end of the year it was decided to divide into three clusters, in order to maintain a high level of personal interaction on Sunday mornings. However, by the summer of 1976, one of the three had decreased in size due to college-related transience, so in the fall the Assembly reformed into two clusters, one meeting on the college campus and the other using rented facilities in the community; hence the names “campus cluster” and “community cluster” emerged.

Discussions about buying a property for congregational use began in 1976, resulting in the purchase in 1978 of an empty factory building on South Eleventh Street. Members undertook much of the work to renovate the facility for multi-purpose uses: gathering for worship, rental apartment, and day care for children.

During the 1980s, the congregation hired its first part-time staff person, bought additional property next to the meetinghouse, and engaged in study programs of such topics as marriage and divorce, leadership and ordination, Christology, and human sexuality. Special interest groups were formed to develop liturgical dance and to harbor Central American refugees.

The 1990s began with planning and carrying out the major building addition (worship space and three classrooms) to be shared with Walnut Hill Day Care and Faith Mennonite Church. The congregation also moved toward increasing paid staff, so that by the end of the decade, the pastoral team consisted of Lois Kaufmann, Karl Shelly, and Mary Lehman Yoder, each with a one-third time job description. The campus cluster was discontinued in 1997.

Small groups continue to be an integral part of Assembly life, with more than 175 people in 20 groups that meet 2-4 times per month. With over 110 covenanted members, Sunday morning attendance varies from 190 to 240.

🔒Find out more about Assembly’s history in our annual state of the congregation reports and statistics.